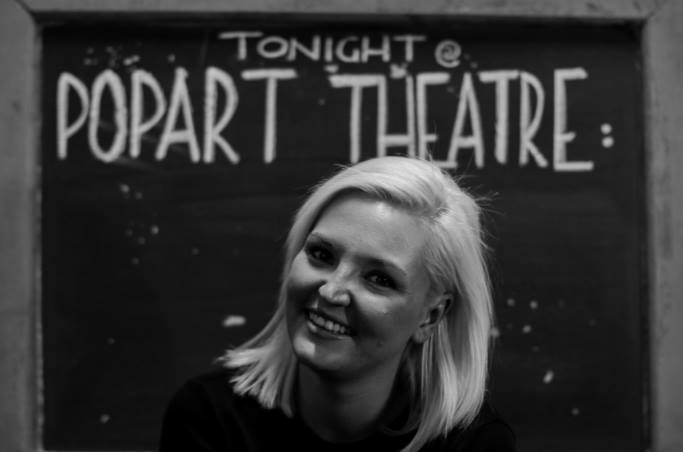 Hayleigh Evans is a theatremaker and co-founder of POPArt, an independent Johannesburg based theatre, production company and performing arts centre that is located in the heart of Maboneng. Now in its 6th year, POPArt has become a staple in the Johannesburg theatre industry and has helmed some of South Africa’s most exciting, edgy and celebrated work.

My gran is a very important figure in my life and she was very active in taking us to the theatre from a very young age, obviously to all the pantomimes which is interesting because I’m unfortunately not talented enough to be a musical performer. I think when I was four years old, Tobie Cronje was on stage as a fairy godmother and I ran up onstage and hugged him. Clearly I just wanted to be onstage and couldn’t just sit and watch, which I think has also been an interesting thing in the frame of POPArt. We started very much as a facilitator’s role and it was very interesting in trying to hold back from performing to get the theatre going. Only last year was the first time [that] Orly (Shapiro) and I could be creatively involved and could produce our own creative work.

Every now and then we felt a twinge of jealousy but it was perfectly timed. It wasn’t so much difficult. It’s been such a privilege to be able to facilitate such great work that [it] was fine for it to be a focus but we did make that call to say, “Ok now we actually need to at least, once a year, have a creative project that we are working on so that it doesn’t become an issue.”

You and Orly created POPArt right after graduating from AFDA. What was it like developing this model from scratch because there isn’t an example to follow?

It was very interesting because I think one of the things I learned, certainly in my role as brand manager in Maboneng and working with an entrepreneur like Jonathan Liebemann, was not sticking to an idea. To be very flexible around creating spaces for people and allowing them to inform what it becomes. I think that journey was really interesting. We had a set idea about a performing arts center that became a theatre because that is what the demand was. The framework kind of set up itself. I think what I learned to do within the role as a cultural manager was create risk-free models for arts and culture activation. That was how we set it up as a risk-free space where we were taking the risk but in the same breath we were also lucky to set up a lot really good deals where it was low-risk enough. We each put in R10,000 to start the business, to paint a room black and just build from there. I think the most difficult part was having to work in other roles to make money while we set it up.

Was it hard at all to have other people come onboard with this idea because it was so new or because you were so young or did people take to it very quickly?

People were amazing. I think it is indicative of how much of a need there was for it in the Johannesburg landscape. From experienced performers, to people just starting in the industry, everyone was incredibly supportive. When we started I said to Orly, “What’s great about Joburg is that you can have access to anyone. They are only a phone call away. Someone will give you their number.” We had this list of people we wanted to contact and she said to me, “All they can do is say no.” And no one did which I think is incredible. There was really so little backlash in terms of us doing it and starting it. Everyone was just supportive and excited and they have remained so. 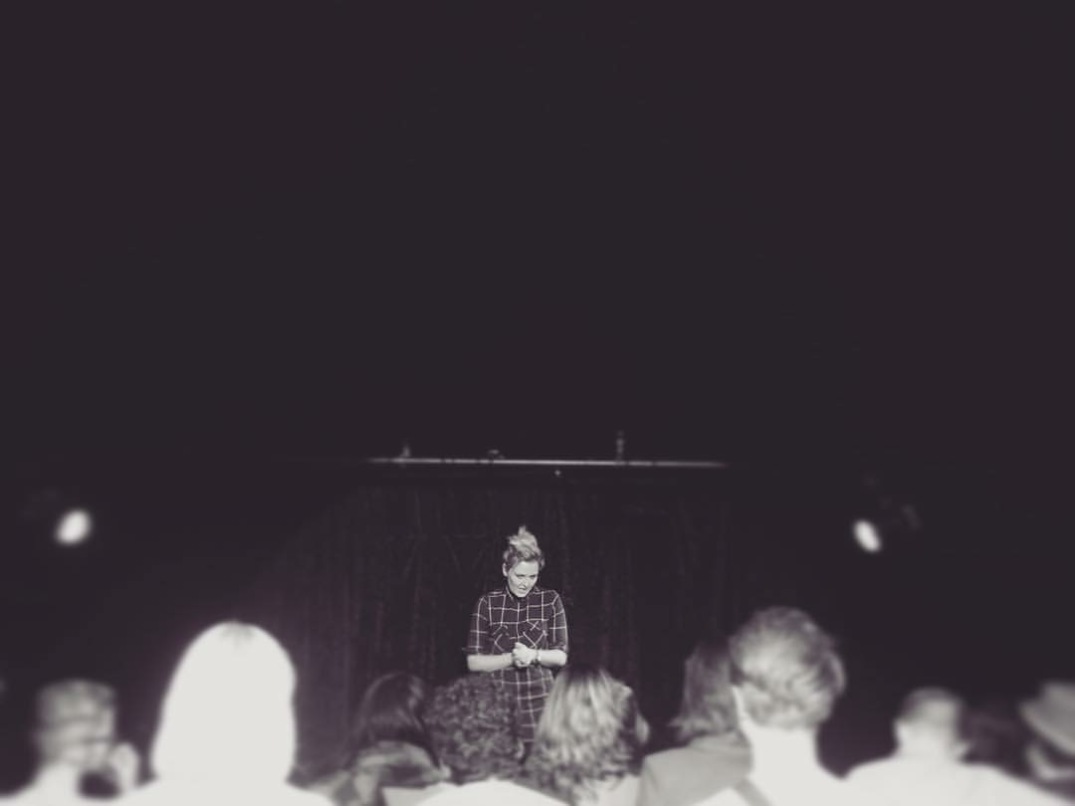 There seems to be a very big disconnect between Cape Town and Joburg and what is culturally being done. Have you noticed that at all?

There is but it’s not just Joburg and Cape Town. It is the whole of South Africa and the arts and culture scene seems very separate. We’ve acknowledged that, so we started a partnership with The Alexander Bar in Cape Town and that is two levels, one is to introduce each other’s work to one another and really see how different they are. When we perform at The Alexander Bar, we get such amazing feedback because the Joburg work is very different to Cape Town work. The second thing is to create a fringe network where shows can perform and get new audiences in different fringe spaces by setting up that network and making it easy for people to access different spaces. It also helps Jon (Keevy) and I curate programs because I’ll be able to ask him what he thinks will work. He knows his audience and I know mine. Then it becomes, again, less of a risk to take the shows down because we know they are going to work in the space.

Have you ever had to tailor a piece to fit a Cape Town audience or a Joburg audience?

I don’t know. We’ve not had to yet. The season that we are doing at the end of March is going to be very interesting because we are sending up a sketch comedy group called Thenx Ladies. They are absolutely phenomenal and have done incredible things in Joburg and are very well-known here. It is very much an introduction to the market there. They had a show, that won an Ovation award at the National Arts Festival, which is highly political whereas their predecessor show was a sketch comedy. What we decided to do because that market has never seen them, and I don’t know how Cape Town is with politics, we decided to do a merge of the The Triple M Mammmas Kurk About AzaNya! so that we could still keep the political stuff but introduce the way in which they present work to a Cape Town audience. It’s the first time we are tailoring something and I think it is going to be very interesting.

So you haven’t yet noticed a show that has done well here and then been not so well received in Cape Town?

Because you have contributed so largely to the South African theatre industry, what has your perception been about its evolution?

I can feel the impact that we have made and I think it extends beyond the fringe spaces. I think it expands into the main spaces like The Market Theatre and Theatre on the Square and all of those spaces because we are introducing a young, not typical theatrical audience to a theatre space. Things like The Box Comedy become a conversion audience from comedy into theatre because they know the space and they trust the space. I really feel like there has been an expansion of theatre. What is great about an experimental space like POPArt is that it allows for people to create completely new content and give new things a try and really expand on the kinds of stories that we are telling. I think what has changed in the last five years is the kind of theatre that you expect to see. I teach a business and theatre course at The Market Theatre lab and we were having a conversation around audience development. It is so interesting to see the perspective of 19/20 year olds and what their network’s perception of it is. There is still a long way to go in the perception of who theatre is for and how do you access the arts and culture market? A lot of people feel that it is still inaccessible and it goes down to the way that we speak about it, it goes down to the way we write our blurbs. You can write a blurb that sounds very academic and then that cuts out a whole lot of your market. I say to them to keep it simple, keep it exciting so people come to the theatre. Let’s create a space and that is certainly where I feel POPArt sits perfectly is that we are creating a space where we are almost making it a little bit informal.

How do you go about maintaining that community aspect that POPArt is so focused on creating?

One of the most important things about POPArt when we started was that it was a networking space. It is so great to also then collaborate with another space and then everyone gets to know each other. In order to facilitate networking or collaboration, you need to provide physical space in the way that public spaces are designed to let people sit and talk otherwise it is not going to happen. I think that also goes into the design of POPArt and its program and its kind of events. The workshops are something that we are looking at expanding weekly this year and going back to the idea of a performing arts center and creating more of those kinds of spaces. The workshops bring in a hugely diverse network of people who now meet and spend five or six hours playing and learning together. It is very encouraging to see everyone take each other’s numbers and details afterwards. That is how we make work.

Jemma Kahn! Bronwyn Lace who is the animateur of The Center For The Less Good Idea. She is amazing. I love Tara Notcutt‘s work. It’s been so wonderful to watch Lebo Mashile work. She is absolutely incredible. Maude Sandham, Simona Mazza and Rachael Neary from Alt Eye Productions. They graduated from Rhodes two years ago and it is so nice to see guys coming in with a fresh attitude about really making and creating theatre. Mbali Malinga who I think is a very exciting female physical performer. I really enjoyed watching her work last year and seeing a woman in a physical space which is something you don’t often see. Khanyisile Ngwabe and Dimpho More, they graduated three months ago and they are already creating their own professional work and they are beautiful talents. It’s so nice to see established theatremakers and how many new theatremakers are emerging and doing well. And of course, the person I look up to in terms of stalwarts is Toni Morkel. There is no one better than Toni Morkel and I think what is so great about her is that she has given of her time so freely to a younger director of theatremakers. Watching her direct Father, Father, Father was just a wonderful experience because she is so experienced in working with young people and so free to giving that information and that knowledge and share in making a beautiful product.

The Real Dirt, directed by Hayleigh is currently running at Alexander Bar until Saturday, April 1st. Tickets can be purchased here.

The Triple M Mammmas Kurk About AzaNya! written and performed by the Thenx Ladies is also on at Alexander Bar until April 1st, Tickets can be purchased here.

Special thanks to Hayleigh Evans.

All photos supplied by Hayleigh Evans.

One thought on “A Conversation with Hayleigh Evans”