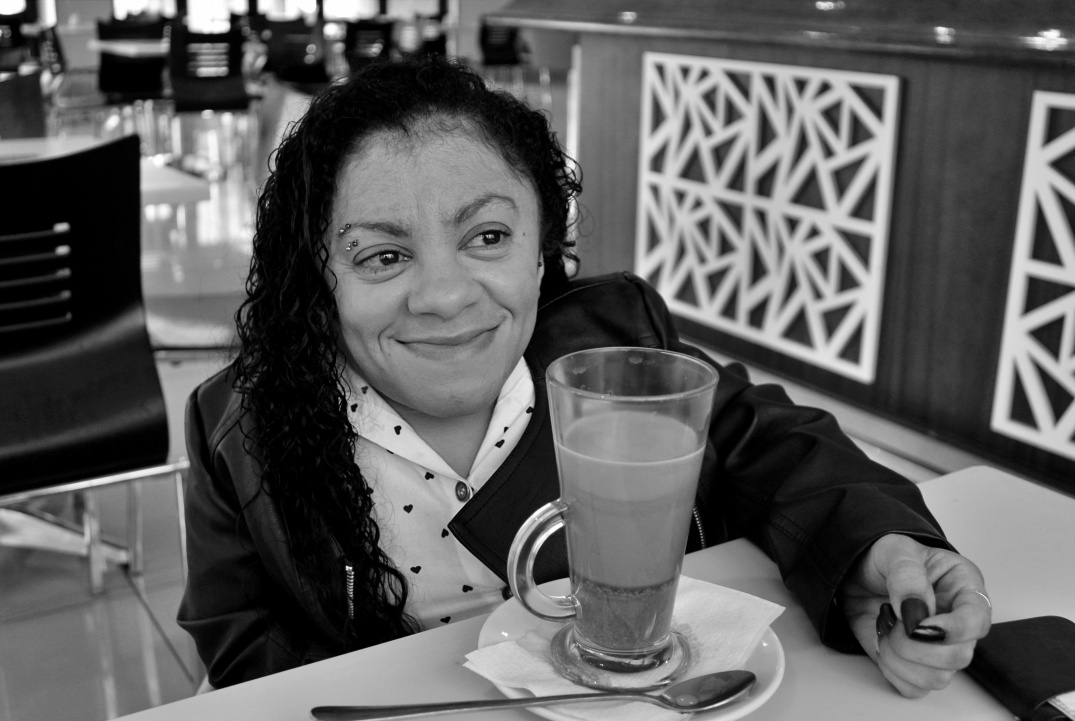 Christelle Dreyer is a dancer, graphic designer and performer. At a young age, she discovered her love and passion for dance. Christelle uses her unique body movements within dance styles varying from Contemporary dance to Ballroom and Latin dancing. As a Ballroom and Latin Dancer, she won numerous competitions. In 2007 she won first place in both Ballroom and Latin at the Holland World Championships. In working for Remix Dance Company, Christelle taught children as part of the Remix Integrated Dance Project with Nicola Elliott and Malcolm Black. In 2014, she performed as part of the UNI Global Union Women’s Conference. Partaking in the Axis Dance Company Intensive, Christelle found herself dancing and performing among dancers from across the world. Most recently she was seen acting in Marat/Sade directed by Jaco Bouwer at the Baxter Theatre. In 2017, she received the Cultural Affairs Award from the Western Cape Government for Contribution By Person With Disability To The Arts.

I didn’t even know that I would try to pursue a career in the arts. I just vaguely remember saying, “When I grow up, I want to be something creative,” not understanding what that actually means. My mother would ask me and I was like, “I don’t know. Something creative.” But then I also had some strange things like I wanted to be a dog doctor. Such a kid, you know but I think it was meant to be, I guess. I just didn’t know.

What I found so surprising is that you went to study graphic design. What was the decision around choosing to study that?

As I told you, I wanted to do something creative not understanding what something creative means. I was finishing school and you get to Grade 11 and 12 and are supposed to now figure out what you want to do. I needed to figure out what I wanted to do. I knew it was something creative, as I told you, even though I was dancing at the time, because I’m disabled, I didn’t really think that I could actually be a dancer as a career. I just thought it was some kind of hobby that I was doing and that’s how I treated dancing at that stage in my life. Going back to something creative, I was researching and you go for those aptitude tests and do all those things when you are about to leave school and then I was like, “Graphic design? Maybe Architecture?” It was one or the two and architecture I was like, “I’m not walking around with a bag that’s bigger than me and a ruler that’s bigger than me. Can you just imagine the chaos? Let’s skip that idea.” I studied graphic design and ended up with a portfolio bag with huge boards and a meter ruler that is almost the same height as me and a toolbox full of art supplies. I ended up doing that anyway.

When was your first encounter with dance?

I was in school. My very first encounter where I actually realised, “Maybe I can dance,” was with Jazzart Dance Theatre 17/18 years ago. They came to the school and they did their program that they used to do at schools and I discovered I could dance.

You specialised in a few different styles of dance. Why did you choose those ones as opposed to any others?

After Jazzart came to the school and we did that whole project and performance, about two years later, another lady came to the school and I ended up doing Ballroom and Latin but I actually just did it as one of those things that you do after school and then you’re a teenager and you just do anything and you take nothing seriously at that age. I was dancing and it just grew from there and Ballroom and Latin became a huge part of what I did for many years. That has a whole history of its own and then somewhere along the line I was like, “I want to try to switch it up a little bit. Let’s take an open class in Contemporary.” And then I ended up back where I started.

Which of those styles comes most naturally to you?

I don’t know. I actually enjoy all of them. I think Ballroom and Latin, I just trained in it more so it was set in my body for a longer period. It’s like muscle memory that just sits in your body and so that was a bit easier but the more classes I took in contemporary, the more performances I did, the easier it became and the more it sat in my body and so I think the more you work on something, the easier it is to do it. I just like any kind of dance really.

Do you have to maintain a certain routine so you can fit in your professional dancing career with your graphic design work?

That has been a bit of a struggle for me since forever, finding the balance of how much time I spend sitting in front of a PC designing things and the dancing side. I genuinely just base it on the work I’m doing at the time. If the work I’m doing is design based, then that will be my focus and then a month or three months or a week down the line, someone says, “We need you to dance,” or “Do you want to take this class,” or whatever, then that is where my focus ends up going. I don’t think I’ve found an actual balance.

Is it easy to jump back into it after a few months break?

It’s like exercise. You don’t do it and you get so unfit and you have sore muscles. You can jump back into it but if you want to dance, dance.

I had done some other theatre work as well but I think that was kind of biggish. I dance. I don’t see myself acting as much. There wasn’t much time dancing in Marat/Sade so it was a bit different for me.

What was it that attracted you to that project?

I enjoyed it so much. The cast, the director [and] choreographer were so warm and understanding towards me, trying to help me where they could. Nobody was funny. I get that sometimes, people are just like, “You are a disabled person, you can’t do anything.” Nobody was like that towards me at any point, that I know about at least. It was a warm fuzzy family type of thing.

What is something that experience taught you?

That I can do more than I think I can do.

What do you artistically envision for the rest of your career?

I have no idea. I always say that I’m not good at five-year or ten-year plans because I think life unfolds and throws you into the most random things that you don’t expect and after those things, you discover things about yourself and then you end up changing the five-year plan in like a minute. I plan but I don’t take them seriously because you just never know. You don’t know what experiences you are going to gain and how it impacts you and the way you think and the way you grow.

Is there something you wish people would ask you about that you maybe haven’t been asked before?

People always ask me things like, “How is it to be a disabled dancer?” And I always say that I don’t know because I don’t even know what it’s like to be what you call a “normal” dancer. Maybe I just think people should ask me, “How does it feel to be a dancer?” Because as much as I’m disabled and its a big part of my identity and who I am, it’s not necessarily the complete definition of who I am. It’s a piece of a puzzle but it doesn’t define me in my entirety, I guess. I just want to be a good artist and not someone good for a disabled person.

What is something you are most proud of?

The fact that I could do all the things that I never even envisioned I would be doing in the first place. I think it’s that more than a specific project because in each project or in each thing I do, you kind of have a personal connection to it. Each project that I did, whether it’s design or dance or whatever it is, you learn something from it or you grow and there are memories. I think it’s just about having been able to say, “Actually, I can and I have and I hope to still do whatever it is that I’ve been doing.”

What have you found to be the biggest challenge?

People thinking that I actually cant do things. When you are disabled, you automatically get classified as dumb or incapable of or inadequate or so many things that you can describe it and so before anything even happens, you are already put in the corner because you won’t be able to do it. It’s like an assumption people have that you won’t be able to. I don’t see myself as a master of anything because I’m always learning and I don’t expect to be the best at everything but I don’t think I’m inadequate as such.

If you could go back in time and give yourself one piece of advice at the beginning of your career, what would it be and why?

What advice would you have for any young dancers looking to enter into the professional arena?

Perseverance and persistence, work hard and even if people say no, it’s not the end of the world. The next project or opportunity is just somewhere in the future. Perseverance, persistence and hard work.

You’ve gotten to travel quite extensively in your career. Do you find the dance world to be universal or do you find many differences among the different countries compared to South Africa?

I would say it depends on the dance style that you do and the genre of dance. I find that the world of Ballroom is totally different. It always feels like I’m stepping into two different worlds sometimes and so that also is a bit different but then if I have to take it from being a disabled dancer perspective, I’d say that internationally, disabled dancers are received better. Not completely like they should, because I’m not saying that disabled people are not discriminated in other countries as well, but they are slightly ahead of us in terms of that.

Such a difficult question! Ananda Fuchs from Jazzart has been teaching people to dance for as long as I’ve known her and that’s like forever. She’s awesome. Iman Issacs is awesome.

All photos were taken on March 7th 2019 at Artscape.

Sarafina Magazine maintains copyrights over all images. For usage or inquiries, please contact us.